Last year, shortly after my first—and long-awaited—trip to Israel, I was interested in marching with J Street in the Celebrate Israel Parade. To my dismay, I learned that J Street, as a political organization, is not eligible to march as a sponsor organization. Fortunately, though, J Street directed me to the New Israel Fund (NIF), an amazing partner organization that provides support for civil and human rights and promotes religious tolerance and pluralism in Israel.

Last Sunday, I was proud to again march with the Progressive Cluster (which, aside from NIF also included T’ruah, the Rabbinic Call for Human Rights; Americans for Peace Now; and Partners for Progressive Israel) in the 2015 Celebrate Israel Parade. This year’s parade theme was “Israel Imagines,” and it was uplifting to march with a wonderfully diverse group, united by the vision of an Israel that continues to strive to live up to its founding principles, in particular that Israel be “based on the precepts of liberty, justice and peace taught by the Hebrew Prophets” and that it “uphold the full social and political equality of all its citizens, without distinction of race, creed or sex.” My fellow marchers included many familiar faces from J Street NYC including my friend Jennifer—we bonded on Masada and marched together last year as well—and my friend Myriam, who, along with Jennifer, worked with me to help organize a successful J Street event in Brooklyn earlier this year. 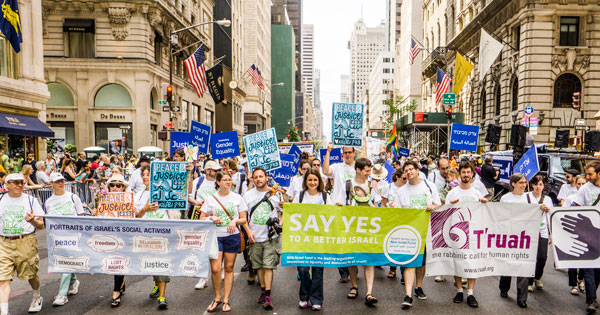 Rain was forecast, but we experienced only a brief sun shower just before we stepped off on our march up Fifth Avenue. Our t-shirts read “Peace & Justice” in English, Arabic and Hebrew. Who could argue with that? But of course a few hecklers did. We were instructed not to engage hecklers in debate, but rather to offer them flowers.

Finally, I must give a huge shout out to everyone in the LGBT cluster who marched immediately behind us. Their sound system and DJ provided the perfect soundtrack for our march: “We are family” indeed.

If you’d like to see more pictures and reflections from another J Street NYC member at the march, check out Gili Getz’s story in JewSchool. Thanks for those that marched with us, and we hope to see the rest of you at J Street events coming up soon!