If you’re just watching the Democratic convention on TV or following Trump’s tweets, you’re missing out on a whole lot. I wish you could hear what I’m hearing in Philadelphia.

Yesterday, I was at an event that J Street hosted on the evolving politics of the Jewish community. The room was filled with delegates, activists and Members of Congress. One of our panelists, President Obama’s former senior adviser David Axelrod, told us that last summer Members of Congress stepped up and supported the Iran deal in part because J Street made clear that American Jews are not monolithic in their views about Israel. There’s now a viable alternative to hawkish groupthink.

Congresswoman Jan Schakowsky, the Jewish, Democratic representative from Illinois, was in the audience — and she stood up to drive home just how widespread that shift is.

She described how, when she first accepted J Street’s endorsement in 2010, it was considered “an act of bravery” — and her pro-Israel, pro-peace views were deemed controversial. But today, she said, a huge portion of Congress is thrilled to be endorsed by J Street. Now she is flooded by calls from candidates asking how they can earn our support — and if she can put in a good word for them.

As Rep. Schakowsky put it, “It’s a sea change.”

We’ve heard about that sea change from so many people this week, as our staff, volunteers and students spread out all over the city.

We’ve seen it in the many delegates, attendees and even Members of Congress who have been eager to get their hands on the fans we’re giving out. The fans, which read “Another Fan of the Iran Deal,” show off their support for the landmark diplomatic accomplishment that has helped make Americans and our allies safer while averting war. And they help them to stay cool in the blistering heat. 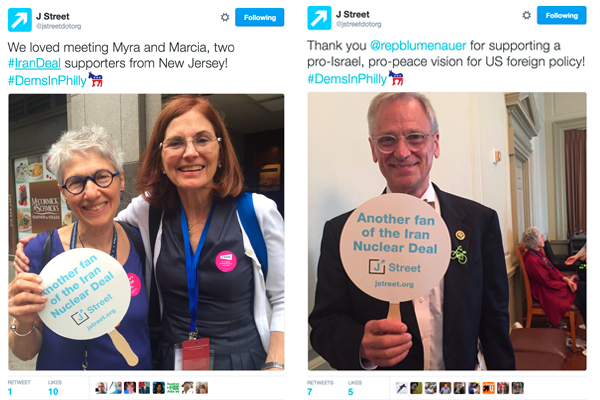 We’ve seen it on the main convention stage, where so many J Street endorsees have given prime time speeches.

We even saw it in the handful of angry protesters who stood in front of our events on Tuesday — a group dispatched by the Sheldon Adelson-funded Republican Jewish Coalition. While they yelled things like “J Street you suck,” Members of Congress streamed past them into the packed lunch we hosted, excited to talk about the pro-Israel, pro-peace views of the American Jewish community — and the impact that we’re going to make in November. 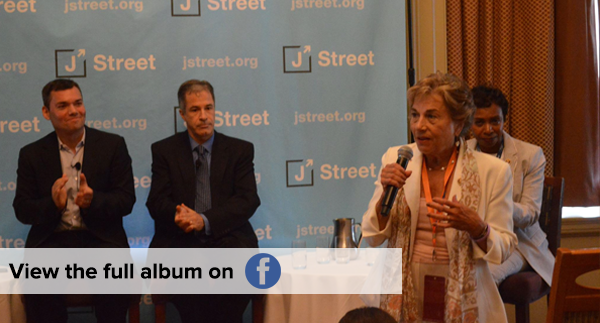 The contrast couldn’t have been more stark. It’s increasingly clear that we are the mainstream, and that the tiny right-wing fringe of our community has lost its hold over our politics. What they’ve lost in impact they try to make up with in insults. But this is the City of Brotherly Love, and we’re not going to take the bait. As Michelle Obama said, “They go low, we go high.”

We’re spreading the message proactive support for the two-state solution and diplomacy-first leadership in the Middle East is the best way to secure Israel’s future and to make Americans safer. It’s a positive vision for our foreign policy future that resonates with leaders and voters here and across the country.