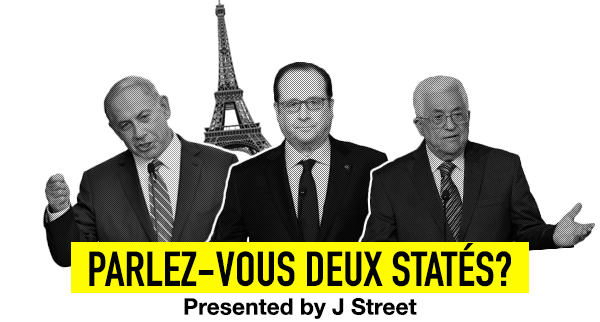 What’s the French Initiative, and why should I care about it?

Like a lot of the international community, France is worried about the lack of progress in resolving the Israeli-Palestinian conflict. To try to make headway they’ve put forward a new plan to bring world leaders together to discuss solutions, with the eventual goal of holding a peace conference in Paris featuring negotiations between Israel and the Palestinians. The first phase of the initiative kicked off today, when foreign ministers from over 25 countries — including US Secretary of State Kerry — met in Paris.

What was the result of that first meeting?

The participants released a joint statement, which affirmed that the two-state solution is the only way to reach a lasting peace and called on both Israelis and Palestinians to demonstrate a genuine commitment to two states in their policies and actions. The statement also made clear that the current situation is not sustainable — and expressed alarm at acts of violence and settlement expansion that make it harder to reach a two-state agreement. It stressed the positive role that multilateral efforts like the Arab Peace Initiative could have on the prospects for peace.

What do the Israelis think about this?

Prime Minister Netanyahu has been dismissive of the effort. He insists that “direct talks” are the only way to make progress in resolving the conflict and that outside efforts (like the French one) just get in the way. The Prime Minister is worried that the French Initiative may put undue diplomatic pressure on Israel. According to some reports, the Prime Minister is far more interested in a regional diplomatic plan centered around the Egyptians, and his focus has been on bringing Isaac Herzog and the Zionist Union/Labor Party into the government — perhaps as part of an effort to deflect pressure from Europe. Even after bringing right-wing leader Avigdor Lieberman from the Yisrael Beitenu party into the government, negotiations with the Zionist Union are apparently still ongoing.

They’ve welcomed it. The PLO has made clear that they believe only intensive international involvement can create progress and convince Israel of the need to compromise. President Abbas says that bilateral direct talks with Israel have gone nowhere — and that Prime Minister Netanyahu intends to use them to stall, while the occupation and settlement expansion continue indefinitely.

Where does the US fit in?

The Obama administration has responded cautiously. Secretary Kerry joined the first meeting today — an earlier date was postponed to make sure he could make it. The US has been clear that only the parties themselves can ultimately make the decisions needed to end the conflict. But they’ve also been intensely frustrated with the lack of progress and with failures of leadership from both sides.

President Obama is reportedly considering steps he can take during the remainder of his term to help preserve the two-state solution and get the parties back on the right track. Whether the French Initiative could somehow fit it into that vision remains to be seen. Later this month, the Middle East “Quartet” that includes the US, UN, EU and Russia are expected to release a report on the current state of the Israeli-Palestinian conflict and outline their concerns about worrisome actions and trends. That report could help to provide some insight into what the administration is thinking.

Does this have anything to do with what Egypt’s president has been saying about the two-state solution?

While the Israeli government has rejected the French Initiative, they have expressed some interest in a “regional path” that would lean more heavily on the involvement of Arab states like Egypt and Saudi Arabia. Israel’s ties to Egyptian President Sisi have been growing as he looks to expand his regional influence. Last month President Sisi gave a speech in which he promoted the importance of the two-state solution and committed to help bring it about.

Could this be tied into a previous plan, like the Arab Peace Initiative?

Arab involvement could be based on the Arab Peace Initiative (API) — a 2002 Saudi-led plan that would create a Palestinian state based on the 1967 borders, with all the nations of the Arab world agreeing to recognize Israel. This week, Prime Minister Netanyahu and Defense Minister Lieberman surprised many by touting some of the “positive elements” of the API. Is that a serious statement or just another attempt to ward off criticism? Time will tell.

What makes this plan different than other peace initiatives?

According to some reports, the French believe that setting hard timelines for negotiations can help motivate Israelis and Palestinians to make real progress. They produced a document that called for the first round of discussions to formulate parameters for solutions to the core issues of the conflict, which would form the basis for Israeli-Palestinian negotiations. But this did not happen at today’s meeting.

Do the French have a backup plan?

When the initiative was first announced, the French Foreign Minister said that if it failed to achieve a negotiated two-state solution, the French government would recognize a Palestinian state on its own. That was seen by some as a threat to Israel — and French leaders have since indicated that they would not rush to take that step.