Let’s face it. Every election cycle Republicans hope to swing Jewish voters to the GOP. Does it ever happen? No. But they keep trying. And because politicians wrongly assume that Israel is all that matters to Jewish voters, they pander on Israel and attack their opponents as anti-Israel.

In 2012, an unprecedented amount of money was spent on efforts to turn support for Israel into a partisan wedge issue. Because most American Jews don’t vote based on Israel – and actually support a two-state solution and US leadership to achieve it – millions upon millions of dollars were essentially wasted. Well, not completely wasted, because now we can revel in just how off the wall these ads really were. Here are the five most outrageous examples. 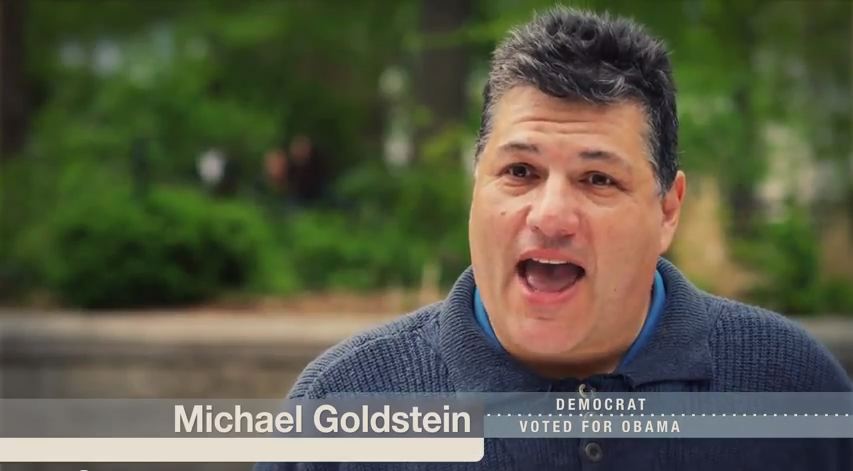 This ad by the RJC stars Michael, purportedly a lifelong Democrat who plans to throw his support behind the GOP because of President Obama’s policies on Israel. Except, there’s a catch — he’s not a Democrat. In fact, he actually donated to Giuliani for President in 2008.

Actually, that’s not the only thing. Michael is pretty uninformed about US policies toward Israel for someone whose vote is purportedly swayed by them. We’ll forgive him for thinking President Carter met with Arafat at Camp David, but it appears his major issue with Obama is the President’s suggestion that peace be based on 1967 borders with land swaps.

This premise for negotiations is so widely shared that even the Executive Director of the far-right neoconservative Emergency Committee for Israel had no problem with it.

4) Friends don’t let friends do what? 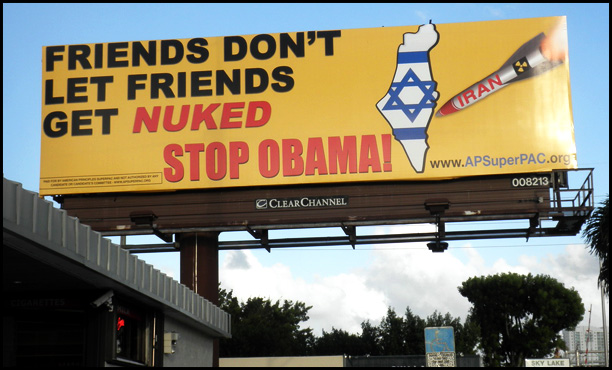 American Principles Super PAC paid for this humdinger of a billboard along the Florida interstate. The map of Israel is what’s known as an annexation map – it includes the West Bank and Gaza – thus representing a situation in which Jews would be a minority in the state of Israel ruling over an Arab majority.

Hard to know if this was a conscious choice by the billboard’s crack design team, but you gotta cut them some slack. It’s hard to pay attention to more than one existential threat at a time. Apparently, friends do let friends sacrifice their democracy. 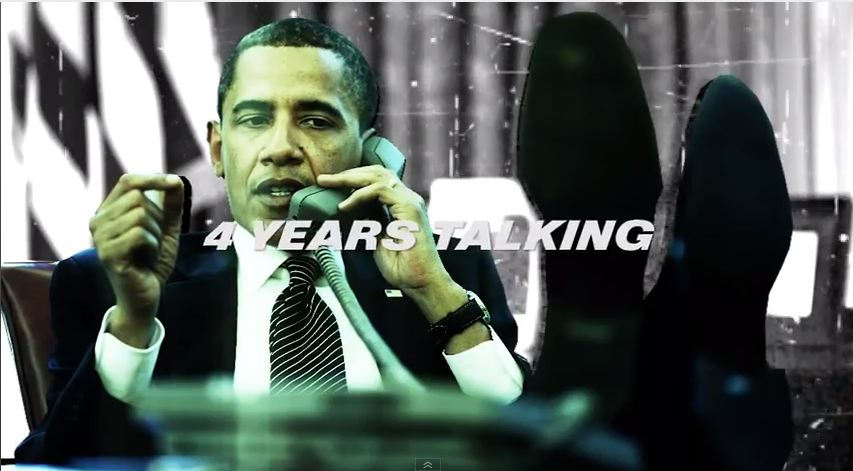 A classic from the Emergency Committee for Israel. The topic: Iran. The message: President Obama has done nothing but talk, talk, talk for four straight years. We all know that the President has a knack for oratory, but does ECI really think he caused the collapse of the Iranian economy with words alone? How impressive!

In fact, the US has worked with the international community to put in place crippling sanctions and has wisely left the door open for diplomacy. And ECI knows that, because their Board Chairman Bill Kristol said he supported the Administration’s approach to Iran just a few weeks prior to the ad’s release.

Nevertheless, the ad dramatically demands that the President act. And if you’re uncertain about what the ad means by ‘act,’ a huge explosion serves to dispel any ambiguity. 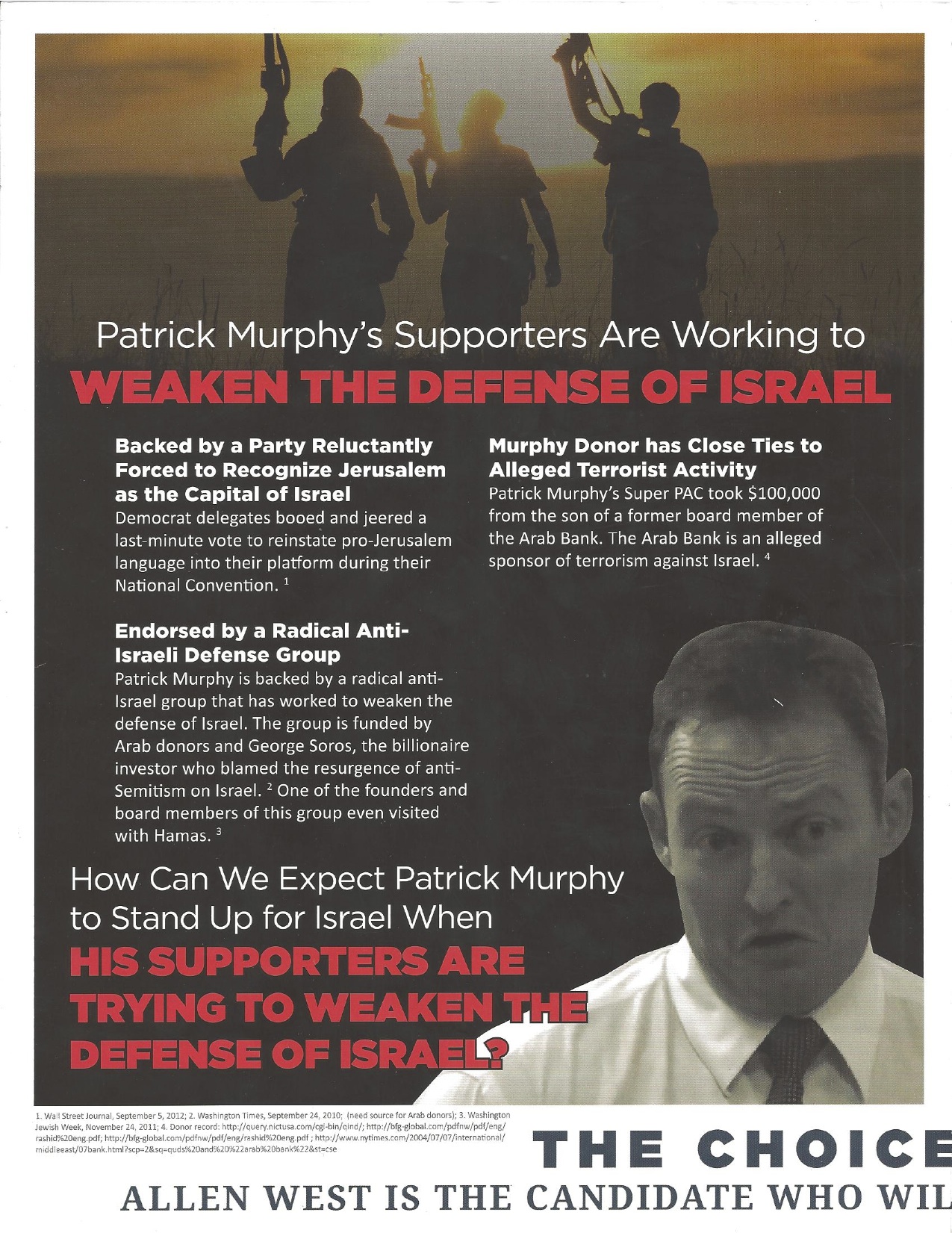 Allen West, a guy who said the two-state solution would be a “foreign policy blunder of epic proportions” sent a mailer to his FL constituents attacking his opponent’s views on Israel. His opponent, Patrick Murphy, happens to be endorsed by JStreetPAC.

West’s own party endorses J Street’s ultimate goal – a two-state solution – in its platform, but that doesn’t stop West from calling us ‘a radical anti-Israel group.’ To prove the point, West included a footnote that was supposed to include an article about our donors. Apparently his staff was too busy counting communists in the Democratic Party, because they forgot to put in the citation. Instead it read, “need source for Arab donors,” suggesting Arabs are across the board anti-Israel. That probably won’t help him among pro-peace Arab-American voters in Florida.

1) The Emergency Committee for Israel makes a mixtape

Our take on the robocall

Swing state voters may have been surprised to see ‘Bill Kristol’ on their caller IDs this past week. They were probably more surprised when they picked up the phone and heard Obama engaged in a heated debate with Benjamin Netanyahu.

Ron Kampeas called the deceptiveness ‘stunning,’ Josh Marshall said the ads took the tradition of robocall mendacity ‘right past 11’ and Washington Post’s Glenn Kessler said “This is one of those days when we wish we were not limited to just Four Pinocchios.” 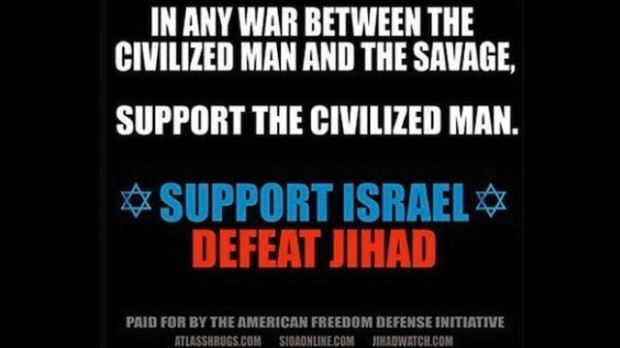 Could there be a better way to usher in the United Nations General Assembly than attempting to incite a clash of civilizations via ads placed throughout NYC? Pamela Geller didn’t think so, and thanks to her, residents of NYC, San Francisco and DC have been treated to this disgusting dose of bigotry each morning and evening on their daily commutes.

Have you seen any outrageous ads politicizing Israel that should have made the list? Leave them in the comments for this post on our Facebook page!