This week, as Prime Minister Netanyahu was visiting the United States, a J Street delegation was visiting Israel and the Palestinian territory.

The two visits and the messages coming out of them could not have been more different. A leading analyst put it this way to us: the Prime Minister looks at the idea of resolving the Israeli-Palestinian conflict through negotiations and diplomacy and lays out the reasons “why not.” Those of us who believe that Israel will only be secure, democratic and Jewish in nature with a two-state resolution of the conflict must explain “how to.”

The choice of path ahead presents a fundamental divide between a future grounded in pessimism and fear and one of optimism and hope, grounded in the Jewish and democratic values on which the state of Israel was founded. 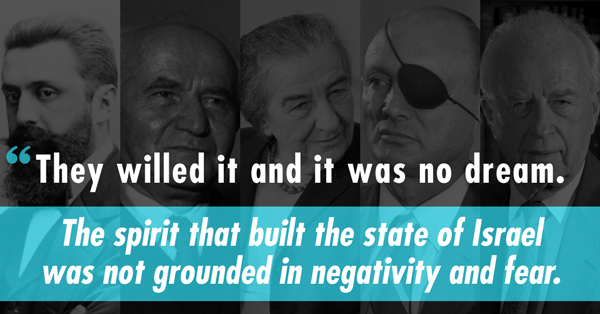 For the Prime Minister, the conflict between Jews and Palestinians is part of a larger “battle between modernity and early primitive medievalism.” This fight, he said, could last a generation or more–and he sees no path to an agreement between Israelis and the Palestinians in the meantime.

The Prime Minister is right: there is chaos in the region, violence in the streets, anti-Semitism around the world and a potential partner in Ramallah with waning credibility among his people.

There is a long history of failure in efforts to resolve the conflict and no risk-free path to ending the conflict through diplomacy and compromise.

Imagine telling Jews at the turn of the last century or those attending the first Zionist Congress that the national homeland of the Jewish people in Israel would one day be among the world’s superpowers–economically, technologically, militarily and in other dimensions.

They willed it and it was no dream. The spirit that built the state of Israel was not grounded in negativity and fear.

Today, we who believe in a secure and just resolution to the conflict with the Palestinian people must offer a clear alternative to the future laid out this week by the Prime Minister.

It was clear as well from the Palestinian business people and civil society leaders with whom we talked.

The center of both societies has had enough of fighting and wants to separate into two nations living next to each other with security and a strong economic relationship.

Important neighboring countries want this as well–Egypt, Jordan, the Gulf States. No longer is the Arab World the bastion of rejectionism our grandparents knew–saying no to Israel, no to peace. Today, the leaders of many of the Sunni Arab neighbors recognize the common interests they have with Israel and that their futures will be better with the Israeli-Arab conflict resolved and a common strategy for dealing with the massive regional challenges ahead.

The right question is how to build this future. And it starts with a resolution of the underlying conflict between the Jewish and Palestinian peoples.

Prime Minister Netanyahu stridently makes a case for why now is not the time to address and resolve this conflict.

Unfortunately, his path of conflict management brings Israel within a few years to a fateful choice between retaining a Jewish majority and sacrificing its democracy or retaining its democratic character while ceasing to be a Jewish homeland.

J Street and our allies must lay out our path as a clear alternative to that of the Prime Minister. Ours is a forward-looking vision, one of hope grounded in reality. The idea of two states and a regional agreement must be presented as charting a path to the future that aligns precisely with the aspirations of those who built the state of Israel–to be a free people in our land and to build a strong, secure state that lives up to the Jewish and democratic values we hold so dear.

True leadership from our camp will show people how to build this future, not why it cannot be done.