If Jews and Palestinians can’t talk openly with each other about the Israeli-Palestinian conflict, we’ll never be able to solve it.

That’s why J Street believes in open conversations that face facts and acknowledge disagreements. It’s why I traveled to the West Coast last week for a series of public events with Ambassador Maen Rashid Areikat, the Representative of the Palestine Liberation Organization to the United States.

For far too long, much of the American Jewish and Palestinian communities have not engaged with or listened to each other. Very few make the effort to hear each other’s stories, grievances, fears or hopes.

As we prepared for these events, the Ambassador and I each heard from members of our respective communities who didn’t want the meetings to happen. They worried about the implications of giving a platform to someone on the other side. We know that some in our communities are afraid to hear uncomfortable words that might challenge deeply held notions and beliefs about the conflict and about ourselves. 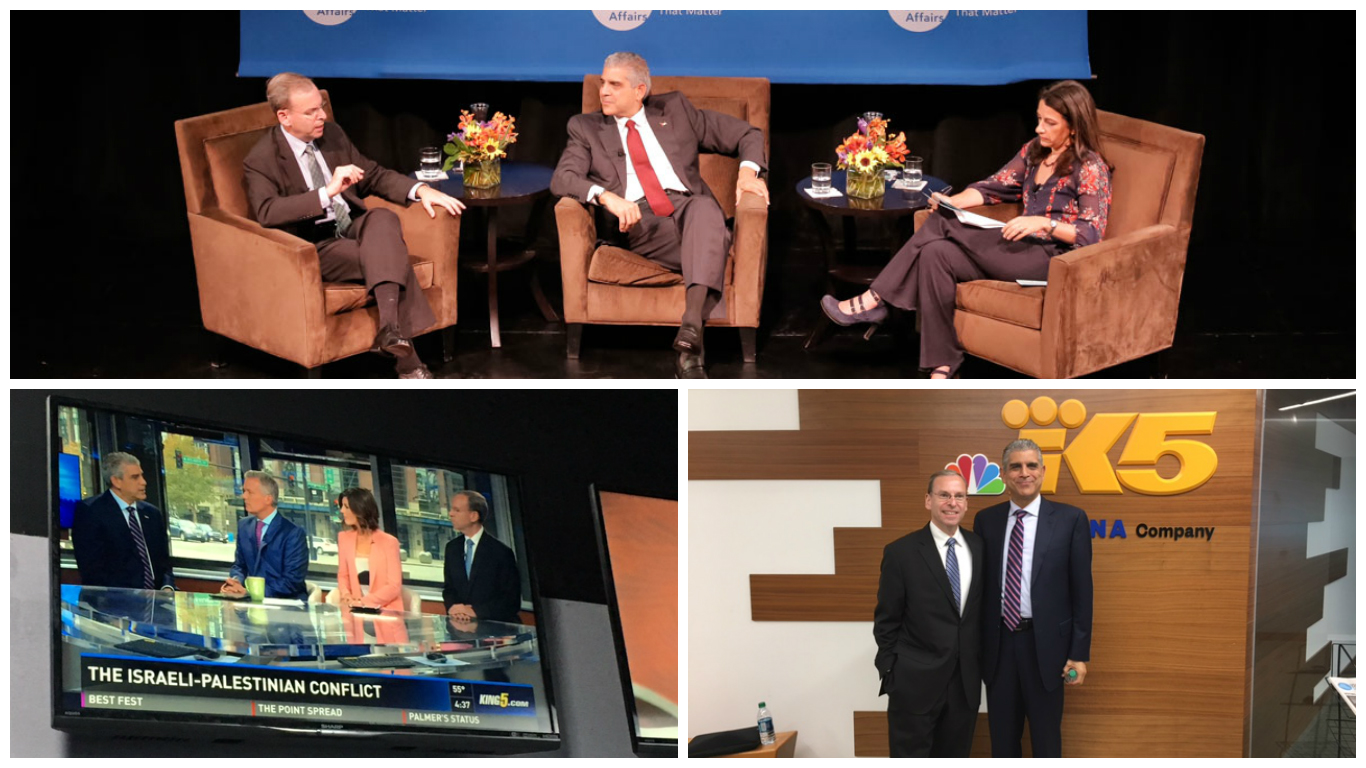 This dynamic reflects the situation on the ground. I remember when I lived in Israel in the 90s, many Israelis had contact with Palestinians. Traveling to Palestinian cities in the West Bank to shop or eat was no big deal. I even studied Hebrew with Palestinians from Gaza at my ulpan.

Today, sadly, more and more Israelis have never met a Palestinian other than in conflict or as a threat. Many Palestinians know Israelis only as soldiers, settlers and occupiers.

And, for sure, most Jewish Americans have never sat and talked with a Palestinian.

We have to change this and to start speaking with each other. Not so that we can convince each other that we are right about everything, but so that we can begin to find common ground and practical ways to work together.

Over the past week, the Ambassador and I worked to model such an open dialogue. We embraced our common ground as two people who want to achieve a peaceful two-state solution, and as two fathers who want to create a better future for our children.

Meeting with communal leaders in Seattle, San Francisco and San Jose, we discussed the obstacles currently in the way of progress toward peace. We affirmed that with good will and a serious commitment to compromising and working together, none of these obstacles is insurmountable.

Of course, we didn’t agree on everything — and we didn’t expect to. Both of us made points that the other challenged.

It’s no secret that J Street has had our disagreements with the Palestinian leadership. This past week at the United Nations, both they and the Israeli government demonstrated that they often would rather ignore and suppress the truth than face facts.

The PLO drove forward a UNESCO resolution that outrageously ignored Judaism’s millennia-old historic and religious ties to Jerusalem’s Temple Mount. For its part, the Israeli government launched a disturbing rhetorical attack on anti-occupation NGOs after they testified compellingly at the Security Council about Israeli settlement expansion and creeping annexation in the West Bank.

Denying the Jewish people’s deep connection to one of its holiest places does nothing to advance the cause of Palestinian statehood. Accusing B’Tselem and Americans for Peace Now of slander does not change the fact that the settlement project in the West Bank is endangering Israel’s future. Israelis, Palestinians and their allies in the United States and around the world need less of such theatrics and more substantive focus on addressing the roots of this conflict.

We need to see and respect each other’s common humanity, recognize that our futures are inextricably linked and realize that we don’t need to agree on everything in order to find common ground and move forward. With that in mind, I’m really proud of the work the Ambassador and I did to begin breaking down old taboos and barriers and engaging in this important conversation.

You can watch the video of our conversation in San Francisco here.

J Street was founded in part on the conviction that we need a more open and honest discussion about Israel, the Middle East and what it will take to build a better future.

We cannot be afraid of facing facts, or of seeing the flaws in the arguments that many on both sides have dogmatically used for decades.

We cannot be afraid of each other.