J Street was founded nearly ten years ago to be a voice for sanity, pragmatism and nuance in the debate over Israel — in the Jewish community and in Washington.

Our goal? Ensure that the pro-Israel, pro-peace views of the vast majority of American Jews are not drowned out by smears, slurs and threats from those on the fringes.

I’m proud that we’ve had real success — look at our support for the Iran deal and the fact that scores of pro-Israel, pro-peace senators and members of Congress are now endorsed by our PAC.

But today, in the Trump era, politics as a whole are worse than they were ten years ago — more angry, more hate-filled — and we’ve really got our work cut out for us.

Loud voices on the far right have long tried to silence debate over Israel by charging those with whom they disagree with being anti-Israel, self-hating Jews or worse. In the Obama era, it seemed they were saving these attacks for their political opponents on the left of the political spectrum.

Now it turns out even those on the political right are not immune.

The latest prominent target of these fringe voices has been the president’s National Security Advisor, General H.R. McMaster. In an administration short on expertise and experience, McMaster is seen by many as a source of reason and stability, who respects the judgement of national security experts and the value of diplomacy. 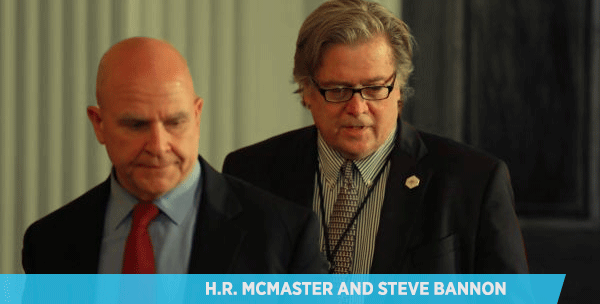 Recently, as he has removed officials from the National Security Council who are known to share the radical ideologies and positions of Trump Chief Strategist Steve Bannon and former National Security Advisor Michael Flynn, McMaster has been attacked by the alt-right.

Anti-Semitic cartoons portray him as the puppet of Jewish bogeymen like George Soros or “the Rothschilds.” Meanwhile, fringe Jewish voices have labeled McMaster “anti-Israel.”

And these alt-right charges have been picked up by the right-wing fringe in the Jewish community.

The Zionist Organization of America (ZOA) has called for McMaster to be reassigned, attacking his positions on Israel and Iran in a ridiculous screed. They blame him for hiring veteran policy experts from the Bush and Obama administrations — and for firing some of the Trump administration’s biggest Islamophobes and conspiracy theorists.

Caroline Glick, a Jerusalem Post columnist who champions the agenda of the settlement movement, has attacked McMaster for recognizing that the occupation of the West Bank exists — and for upholding decades of US policy regarding the status of Jerusalem. Aaron Klein of Breitbart News has gone after McMaster for advocating that the US uphold the Iran nuclear agreement — and for once having served as a fellow at a prominent think tank that defended the agreement.

Glick and the ZOA don’t represent the mainstream of the American Jewish community.

While the large majority of Jewish Americans support the Iran nuclear deal, these and others on the extreme right continue to try to tear it down.

While the large majority of American Jews support the two-state solution, they and their allies advance positions that will lead to endless settlement expansion and a one-state nightmare.

While the large majority of American Jews are horrified by the hateful Islamophobia and anti-Semitic affiliations of Steve Bannon and Sebastian Gorka, the Jewish far right has rushed to defend Bannon and Gorka as “pro-Israel.”

These voices don’t represent us — but they claim to. And they’ve made clear that they’ll resort to smears and attacks to advance an agenda that is deeply dangerous for both the US and Israel.

Whether they are attacking Democrats or Republicans, those on the left or on the right — the attack machine of the far right must be stopped.

We have to make sure that baseless charges of “anti-Semitism” or of being “anti-Israel” can’t be used as political weapons against dedicated public servants of any political persuasion.

It’s our job to make sure that pragmatism and sanity win out over dogma and hate.

It’s our responsibility to champion diplomacy-first policies that make Americans safer, that move Israelis and Palestinians closer to peace, and that live up to our Jewish and democratic values.

If you’d like to support that mission today, please consider chipping in. With your help, we’ll continue fighting for a better future and a better type of politics.