This morning, the United States’ Ambassador to Israel, Dan Shapiro, met with Israeli Justice Minister Ayelet Shaked to discuss her proposed anti-NGO bill, which targets progressive Israeli organizations. The meeting was in part a response to arguments raised in an op-ed Shaked published last week, where among other things, Shaked compared her bill to legislation in the United States. Her piece is riddled with errors and distortions. Here’s a handy guide to help wade through her arguments:

1. Shaked begins with a puzzling interpretation of a Robert Frost poem. Usually, disputes over the meaning of early 20th century American poems aren’t relevant to Middle East politics. Shaked begs to differ. She frames her piece by quoting Robert Frost’s “Mending Wall,” to justify her claim that, before World War I, clear physical boundaries between countries was the best way to “safeguard international relations and world peace.”Leaving aside for a moment the fact that the national boundaries imposed after WWI were an unmitigated disaster, Shaked selectively quotes from the poem. The “good neighbors” with their “good fences,” actually find themselves drawn closer together through the act of mending the separation between their properties. The poem is about how building relationships with your neighbors is much better than being isolated from them, something entirely lost on Shaked.

2. Shaked erroneously and confusingly invokes the American Foreign Agents Registration Act (FARA), to justify the legitimacy of the Israeli anti-NGO Bill. Shaked argues that just like Israel, the United States has legislated against the interference of “foreign agents,” Israel has a right to do the same. There’s a crucial difference between the United States’ legislation and Israel’s: FARA doesn’t compel organizations to register as foreign agents purely by virtue of receiving money from foreign entities.The US Embassy in Tel-Aviv clarified this difference today, stating that “FARA requires individuals or organizations to register as foreign agents only if they engage in certain specified activities at the order, request, or under the direction or control, of a foreign principal – not simply by receiving contributions from such an entity.” In other words, FARA requires organizations under the direction of foreign agents to register as such; the Israeli NGO law erroneously, and unlike FARA, conflates organizations that receive substantial funding from abroad and actual foreign agents. The Embassy further states that the US distinction — between foreign funding and foreign direction — “does not create the chilling effect on NGO activities that we are concerned about in reviewing the draft Israeli NGO law.” This “chilling effect” is precisely why Israeli NGOs are so concerned about the legislation — and why Shaked was wrong to invoke FARA in the bill’s defense. 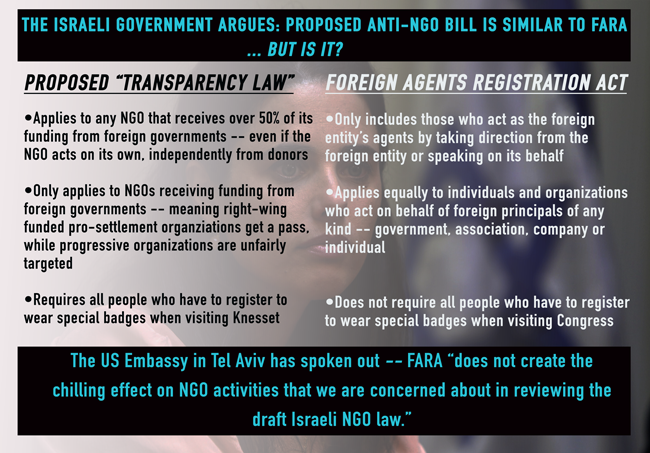 Moreover, FARA defines foreign principals as encompassing governments as well as individuals and associations. In contrast, the Israeli NGO bill does not address non-governmental foreign foreign influence, conveniently avoiding its application to right wing NGOs and settlement-involved groups, which are often funded by individual donors and nonprofits.

3. Shaked tries to “connect the dots” between forces who allegedly want the Jews out of the Middle East, moderate European governments who support a two-state solution, and the progressive organizations who receive government funding. In other words — she implies that progressive Israeli NGOs are somehow working in concert with global anti Semitism.This is an offensive charge, especially given that Breaking the Silence and B’Tselem explicitly state that they carry out their work to actualize Israel’s long-standing Democratic tradition of critical public discourse and free expression. As former head of the Shin Bet, Yuval Diskin, has pointed out, groups like B’Tselem and Breaking the Silence are “a very important part of every democratic regime and an important part of its strength.”

4. Shaked rejects progressive NGOs’ suggestion that Israel acts “immorally” towards the Palestinians under its control, and states that Abbas is ultimately responsible for governing the Palestinians. She denies that there is such a thing as occupation. If Shaked cannot even acknowledge Israel’s role in occupying the West Bank, how can she recognize the legitimacy of groups that criticize it? While Shaked is, of course, free to disagree with Breaking the Silence or B’Tselem, that disagreement shouldn’t amount to a political witch hunt. Why bother rejecting of the occupation’s existence in a piece ostensibly promoting a bill about “transparency?” Its inclusion makes clear the bill’s purpose is to marginalize conversations about the occupation and Israeli human rights violations.

To me, as a young American Jew, B’Tselem, Breaking the Silence and Yesh Din represent the best of Israel. I point to them time and again when asked why I’m still invested in Israel’s future. Rigorous self-critique and the courage to interrogate your country’s most painful missteps sets an incredible example for Jews and activists around the world. Delegitimizing these groups would be a tragedy — not just for the individuals directly impacted by the NGOs’ work, but for Israel’s democracy. This bill is a direct threat to to that democracy, as many leading Israeli politicians have already pointed out. That this is the best defense Israel’s Minister of Justice can muster of the NGO bill is just another blow to its credibility.