In the run-up to the assassination of Israeli Prime Minister Yitzhak Rabin on Nov. 4 1995, the country was witness to a vicious campaign of ultra-nationalist incitement against him and his government, given religious justification by some rabbis and abetted by senior opposition leaders including Benjamin Netanyahu.

Now, as we approach the 18th anniversary of that terrible crime, Israel is again engaged in peace talks with the Palestinians and there are signs that the sleeping dragon of incitement is stirring in its cave once again.

The extreme right-wing religious Jewish Home party, which is part of Prime Minister Benjamin Netanyahu’s ruling coalition, launched a bitter attack on its coalition partner, the HaTnua Party, and especially on its leader Tzipi Livni, who leads the Israeli negotiating team with the Palestinians, falsely blaming her for the government’s decision to release another 26 Palestinian prisoners as part of a deal to get the peace talks going. (Actually Livni opposed the prisoner release).

“The release of prisoners in exchange for the dubious right of Tzipi Livni to meet with (Palestinian negotiator) Saeb Erekat is most terrible. With all due respect, halting the release of murderers is even more important than justifying Livni’s being in the government,” the party said in a statement.

This was immediately followed by death threats against both Livni and Netanyahu posted on her Facebook page. One of Livni’s parliamentary party colleagues, Elazar Stern, was spat on by a 17-year-old as he left a synagogue, although this incident was apparently not connected to the prisoner release.

The atmosphere is nowhere near as poisonous as it was in 1995 prior to Rabin’s assassination by right-wing militant Yigal Amir. But the negotiations are still at a relatively early stage. If and when it becomes clear that Israel is seriously negotiating a withdrawal from the vast majority of the West Bank, the evacuation of tens of thousands of settlers and some form of shared sovereignty for Jerusalem, the venom is sure to increase.

Let’s recall what happened in 1995. From the moment he signed the Oslo Accords with Palestinian leader Yasser Arafat in 1993, Rabin was the subject of constant right-wing attacks, often led by then opposition leaders Benjamin Netanyahu and Ariel Sharon who accused him of giving away part of the Biblical Land of Israel. 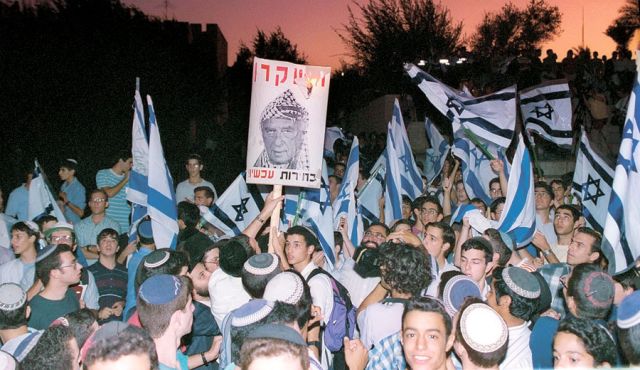 In the first Knesset debate on the accords, Netanyahu compared the agreement with the Palestinians to British attempts to appease Nazi dictator Adolf Hitler before World War II. Referring to British Prime Minister Neville Chamberlain, he shouted at Foreign Minister Shimon Peres, “You are worse than Chamberlain.”

After one particularly fiery Netanyahu speech, thousands of right-wing protesters gathered in Jerusalem’s Zion Square, where they brandished posters of Rabin wearing a Nazi SS uniform and chanted “Death to Rabin!”

The ultra-Orthodox newspaper Hashavua repeatedly ran articles discussing whether Rabin should die. The newspaper branded Rabin and Peres as Kapos – Jews who cooperated with Nazis in concentration and extermination camps. Ultranationalist rabbis both in Israel and the United States wrote opinions discussing whether it was permissible to kill Rabin and revived two obsolete precepts — din rodef (the duty to kill a Jew who imperils the life or property of another Jew) and din moser (the duty to eliminate a Jew who intends to turn another Jew in to non-Jewish authorities.)

On the eve of Yom Kippur in 1995, a small group of religious extremists held a sinister ceremony outside Rabin’s residence and recited the mystical Pulsa da-Nura, a kabbalistic death curse of death.

We are obviously far from those horrible days but they could all too easily return. The potential for violence within the heavily-armed settler community and its allies still exists. The only way to prevent this from happening is for all sections of Israeli society, from the far right to the far left, whether they agree with a two-state solution or not, to vigorously condemn all manifestations of incitement within Israeli society.

The burden is especially on Netanyahu, who as the Times of Israel reported this week, “still invokes Palestinian incitement as a key stumbling block to peace, scarcely missing an opportunity to publicly lambaste the Palestinian Authority for inciting to violence against Israelis” — but is relatively silent about Israeli incitement.

Palestinian incitement should be condemned. But let’s remember, the only time in Israel’s history that a Prime Minister was assassinated, the perpetrator was an Israeli Jew.

God forbid we go back to those dark days.