J Street played a critical role in mustering the support at home to get that deal through the United States Congress…. You made sure the voices of those who support Israel and supported the deal were heard. So thank you – thank you, thank you for your efforts. You have made the world a little safer. – Vice President Joe Biden

The fight over the nuclear deal was the most important foreign policy battles in decades. The outcome of the debate will likely have major consequences for the shape of American foreign policy for decades going forward.

J Street committed to taking a major stand in favor of the deal as advancing the security interests of the United States and Israel. With huge sums of money and resources mobilized by opponents, we aimed to demonstrate to Members of Congress that strong support for the agreement existed among the majority of pro-Israel, pro-peace, pro-democracy American Jews along with American and Israeli security experts.

J Street brought in top Israeli military and intelligence experts to make the case to members of Congress and the media about how the agreement bolsters Israel’s security. Of the 46 members who met with the Israelis, 36 backed the agreement. We’ve collected some of the top quotes from security experts from Israel and the United States who support the deal.

Polling throughout the summer showed that support for the Iran agreement among American Jews was more robust than among Americans overall, bucking conventional political wisdom about the Jewish community.

Interested in diving deeper into the polling? We’ve got all the data from our national and statewide polling available for you to peruse. Our polling showed that the more people know about the Iran deal, the more they support it. So we worked to get the message out through targeted advertising that focused on states with persuadable Representatives and Senators.
&mbsp

“During the recent scramble for support on Iran, J Street, a rival pro-Israel lobby that supports the nuclear deal, has become an influential player and a liberal alternative.”

“J Street, which has begun its own $5 million advertising campaign and has been deploying former military officials and diplomats to Capitol Hill as part of a lobbying effort, has been working to reassure anxious Democrats that they will not face a backlash from Jewish voters and donors for supporting the Iran deal.”

“J Street has been flying in prominent Israelis to visit with lawmakers…. Their message? You can still be pro-Israel and disagree with Prime Minister Netanyahu, who adamantly opposes the deal.”

(Opinion piece by Jeremy Ben-Ami)
“The rush of Israeli politicians and American Jewish organizations to line up behind [Prime Minister Netanyahu] obscures the fact that a growing number of highly-respected Israeli voices and the majority of Jewish Americans actually support the deal.” 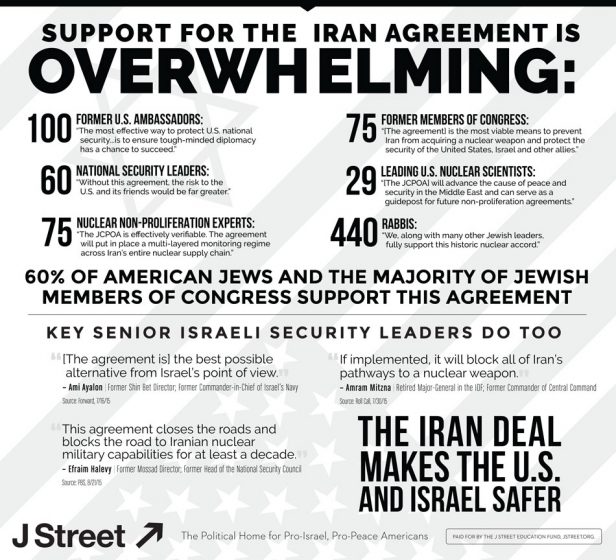