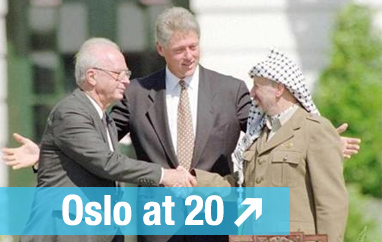 Today, Israel’s two adversaries of 1973 are both rent by bitter internal conflicts. Syria is engulfed in a bloody civil war that began as a popular uprising against a brutal dictator who denied all rights to his people. It has been marked by horrific loss of life and ghastly atrocities which now threaten to drag the United States into the conflict. Egypt, its economy in free-fall, has been torn apart by a military takeover which removed a failed but democratically-elected government.

One lesson we can draw from these events is that democracy is not only the best way we have to organize the political life of a nation but that it is a vital strategic asset in its own right. Israel’s  democracy, despite its imperfections, is vital to its survival. But Israel needs a two-state solution to preserve that democracy. If Israel does not find a way to end the occupation of Palestinian land, it will remain in permanent control of millions of Palestinians who lack basic democratic rights. Such an occupation would slowly sap Israel’s moral strength and reduce its legitimacy throughout the world.

We must learn from the past as we look to the future. The late Yitzhak Rabin, whose historic handshake with PLO President Yasser Arafat remains the defining image of the Oslo Accords, carefully studied the Yom Kippur War and drew the correct conclusion.

In a speech to the Knesset a week after that handshake, Rabin said: “The Yom Kippur War taught us as well as our enemies the limitations of military power and the possibilities entailed in a political solution.” Addressing Palestinians, he said, “We, like you, are people who want to build a home, to plant a tree, to love, to live with you side by side, in dignity, in empathy, as human beings, as free men.”

There are some in the region, and their allies in the United States, who will surely try to sabotage a peace deal if the talks look like they might succeed. This time, they must not win.

It has become fashionable in some circles to argue that the Oslo Accords were a failure. After all, they were only an interim agreement on the path to a full peace treaty that was supposed to have lasted only five years by which time the parties would have negotiated a full peace treaty. Rabin himself was assassinated by an Israeli ultra-nationalist in November 1995 and, as we know, the parties are still searching for that final peace agreement today.

The Oslo process may not yet have brought success, although the parties are still working within the framework it established, but the Oslo Accords themselves remain a huge achievement. The parties finally agreed to recognize each other’s nationhood and legitimacy and vowed to stop fighting and start talking. That cannot be called a failure.

As Robert K. Lifton, a former president of the American Jewish Congress, recently wrote: “Before Oslo there were two armed camps: The PLO terrorist organization seeking to inflict pain on Israel and Israeli interests, and Israel, constantly on guard against attacks … Above all else, the Oslo process told the Arab world, and the rest of the world’s nations, that Israel and the Palestinians were capable of making a deal. From that point on, it was left for the parties to agree on the elements of the final deal; it was no longer in question whether a deal was possible[1].”

J Street was established to help make that dream a reality — and today we have another opportunity. Secretary of State Kerry has challenged American Jews to join a “great constituency for peace” and J Street is leading the way. There are some in the region, and their allies in the United States, who will surely try to sabotage a peace deal if the talks look like they might succeed. This time, they must not win. J Street is determined that at that crucial moment when peace hangs in the balance, the voices of the reasonable, moderate, pragmatic, sane majority will not only be heard but prevail.

Those voices will be heard loud and clear at our upcoming conference in Washington DC, Sept 28-Oct 1. We need your support – and if possible your presence – to amplify our message.

It’s said that those who fail to learn the lessons of the past are doomed to repeat them. Let’s make sure that doesn’t happen again.