Even the firmest supporters of a two-state solution to end the conflict between Israel and the Palestinians could be forgiven for holding their noses when reading about today’s release of 26 Palestinian prisoners, all of whom had been convicted of murdering Israelis.

Prime Minister Benjamin Netanyahu defended this release – the second in a series of four staged releases – as a “necessary evil” and part of the price Israel had to pay to resume peace talks with the Palestinians.

Yet Netanyahu had other choices. As the Jerusalem Post, echoing many other reports, stated today, “Israel was given two choices of goodwill gestures at the onset of the current round of peace negotiations, to either freeze settlement construction or release prisoners.” Netanyahu chose to release the prisoners.

Others have reported there was also a third choice: Israel could have avoided the prisoner release by agreeing to state upfront that it would negotiate on the basis of the 1967 lines plus land swaps – which everyone assumes is the basis of the current talks with the Palestinians anyway. This was blocked by the ultra-nationalist Jewish Home Party which opposes a two-state solution and wants to annex most of the West Bank. That party now has the audacity to lead opposition to the prisoner release – which it forced on Netanyahu. 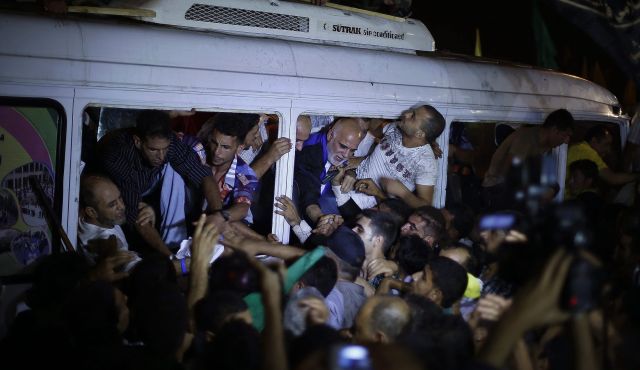 Among the prisoners freed was Omar Issa Masoud, convicted of murdering Ian Feinberg, a lawyer who had been working in Gaza to help improve the economic conditions of Palestinians. Feinberg, 30, was slain in April 1993, when gunmen stormed an aid meeting in Gaza City that he was attending.

Another prisoner on the list was Hazem Kassem Shbair, convicted of murdering Holocaust survivor Isaac Rotenberg at a construction site where the two worked together.

It’s no surprise that the release of such individuals has sparked a wage of revulsion in Israel that cuts across party lines. The unseemly celebrations that ensued in the West Bank and Gaza, where these men were hailed as national heroes, increases the feeling of disgust in Israel and among its supporters around the world.

The big danger is that it will weaken support for the negotiations themselves – and there are two more rounds of releases to come which means we will have to go through the entire cycle twice more.

Netanyahu has tried to appease the settler movement by approving construction of 1,500 new housing units in Ramat Shlomo, a neighborhood over the Green Line. This is at least the third time Israel has announced plans to build these apartments. The first was in 2010, overshadowing and marring a visit to Israel by Vice President Joe Biden. The second was last December but the plan was frozen ahead of President Obama’s visit to Israel in March.

It’s a perfect example of compounding one error by committing a second.

Netanyahu has committed Israel to the prisoner release and now must follow through. But he should start building support at home for the negotiations and begin to prepare the public for the painful concessions Israel will have to make in order for them to proceed. The Palestinians should do the same.

We need to keep our focus on the grand prize – an end to the conflict, an end to occupation and a peaceful and prosperous future for the two nations living side by side. We wish Netanyahu had chosen either of the other two options he was presented with instead of the prisoner exchange. But right now, we need to get it over with and move on with the negotiations.