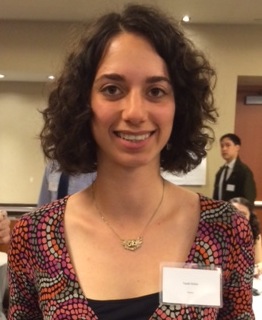 This month, we spoke with Sarah Beller, a rising senior at Stanford University who is a member of J Street U as well as the leadership board at Stanford Hillel. In engaging groups on both sides of the political spectrum and of the Israeli/Palestinian divide, Sarah and J Street U Stanford are doing inspiring work. Check out our interview with Sarah and how she is helping to drive the pro-Israel, pro-peace, pro-democracy conversation at Stanford.

J Street: What drew you to J Street U?

Sarah: I grew up in the Conservative movement with a strong sense of my Jewish heritage and a strong relationship with Israel. I traveled to Israel many times with my family.When I got to Stanford, I got involved with Hillel and other groups on campus. I was struck by how rarely people seemed to consider other perspectives in the Israeli-Palestinian conflict. Students for Justice in Palestine focused on the suffering of Palestinians, but ignored the suffering of Israelis. In the same way, pro-Israel groups only focused on Israeli suffering. When J Street U at Stanford was founded last year, I finally had a place where I could express my Jewish and Zionist identity in a way that was consistent with my values and commitment to human rights and social justice.

J Street: Why do you believe a two-state solution is so important?

Sarah: As Jews, our history is one of oppression. And we learn that because we were slaves in Egypt, it’s even more important that we look out for others who are oppressed. So when we see problems in the world, we should work to fix them. I believe that our special connection with Israel drives us to start there. We need to work to hold Israel to the highest standard.

And right now, the status quo can’t hold. We can’t have a Jewish, democratic state while the conflict and the occupation persists. And I don’t think a one-state solution works. So the two-state solution is the only pragmatic solution.

J Street: What have been some highlights and challenges for J Street U Stanford?

Sarah: J Street has opened up so many conversations on campus that weren’t happening before. Many of them have been enlightening, and some have shown me where I diverge from others in the community. But the ability to discuss these issues without fear of being ostracized in the community is a great thing.

Over the past year, we’ve had some great opportunities to work with partners on both sides of the political spectrum. We’ve worked with the Stanford Israel alliance and had a table at their big Israel Independence Fair. We sponsored a film screening of The Gatekeepers with Hillel. And we did a joint memorial service for Yom HaZikaron and Nakba Day with Students for Justice in Palestine.

J Street: What did you think of our recent summit in San Francisco?

Sarah: I thought the summit was fantastic–the best J Street event I’ve been to by far. The speakers were especially good. On the opening night, [former Palestinian Prime Minister] Salam Fayyad, [former Israeli Ambassador to the UN] Gabriela Shalev and [former US Ambassador to Israel] Dan Kurtzer gave amazing speeches, and weren’t afraid to criticize their own side or offer pragmatic suggestions. I thought Kurtzer had some great ideas for moves that the US can take, to introduce a framework and take it to the UN Security Council if the parties aren’t willing to move forward. I also loved seeing MK Merav Michaeli the next day. We need more windows into what Israelis think, so we can work harder to reach them.

J Street: What would you want Americans to do to help make peace possible? What do you hope for the future?

Sarah: I think the peace framework is a good idea. I also think we need to do more to reconcile what the US says about the conflict and what it actually does. Multiple US administrations have said that settlements are illegal, and yet they continue to veto UN resolutions condemning them. If we say we’re serious, we need to act like it.

I think J Street’s role in all of this is so important. The pro-Israel voices being heard in this country still don’t reflect the majority. But the two-state solution is still very urgent. So despite the disappointment of the breakdown of [Secretary of State] Kerry’s peace effort, it’s important not to be disheartened. It’s too easy for cynics and detractors to point to another failure. But that won’t get us anywhere. We need to redouble our efforts and try even harder. And our community is moving. J Street is seeing increased support, increased recognition. I’m not disheartened. I’m optimistic.