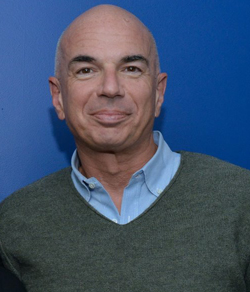 This month, we sat down with J Street NYC Co-Chair Peter Frey,who told us he was inspired to get more involved with J Street after what he calls the “one-two punch” of attending the J Street national conference and then traveling to Israel with a J Street leadership mission. This eye-opening experience led him to devote himself to doing what he could in his own community to advance the prospects for peace. Most recently, Peter helped to organize last month’s Leadership Training Summit, which brought over 70 J Street local leaders to Baltimore for two days of strategy and training. Check out our interview with Peter!

J Street: Tell me about your connection to Israel.

Peter: Israel and Judaism were very conscious and significant parts of my childhood. I was born and grew up in Austria, the son of two Hungarian Holocaust survivors. I was raised on the very traditional view of Israel, that it was a safe haven for Jews that was surrounded by existential threats at all times. I’ve made many trips to Israel throughout my life, to visit family and friends, for weddings and bar mitzvahs and other events. It’s a very close emotional bond.

But as things in Israel on the ground were changing, the story in my head really wasn’t. I think that’s true for a lot of people in the Jewish community.

J Street: How did you get involved with J Street?

Peter: In 2011, my good friend Charles Kremer, who’s on the J Street board, wrote a travel log from one of J Street’s missions to Israel. It was a very strong message, about how he was very concerned about where Israel was headed without a two-state solution, and urging people to join him at the next J Street conference.

Well, my wife and I took him up on his offer, and J Street opened our eyes. The one-two punch of attending the conference in 2012 and then going to Israel with J Street in 2013 were really decisive moments for us. We suddenly realized that there were thousands of people who had the same discomfort with the old narrative. We made a lot of new friends.

The mission to Israel was even more explosive for us. Crossing into the West Bank for the first time after so many visits to Israel, and actually seeing what occupation looks like, really shook us to the core. We had the opportunity to meet with Israelis and Palestinians, business people, peace activists, politicians, settlers. We realized that the status quo is both unsustainable and unconscionable.

I was so moved that when I came back, I wanted to do more. I’ve now been co-chair of the New York City chapter for exactly one year. I’ve gone from being a silent participant to being all-in. I devote a lot of my time to the chapter, to fundraising, to spreading the story.

J Street: What did you think of LTS?

Peter: New York is an ideal community for J Street and it’s also a difficult one. The Jewish community is large. There are so many young people. National politicians come here every week. Of course, New York is also the the headquarter of most Jewish establishment organizations, which have dominated the community for a long time.

Over the past few years, we’ve had some really tremendous successes. Last spring, over 500 people came out to our 2 Campaign town hall to see [former Israeli security chief] Ami Ayalon and show their support for peace.

We’ve built a well-functioning infrastructure in the city, building good relationships between J Street supporters and local and national politicians. We just created what we call the J Street welcoming committee, so that when political endorsees come to New York, we have a group of finance committee members who can meet with them for an informal breakfast or lunch. It’s a system that could work well in a lot of communities.

J Street: What kind of change do you hope to see in the future, for the Jewish community and for Israel?

Peter: Our goals are ambitious and straightforward. We are working toward a more open and nuanced conversation about Israel, to change the politics and policy for the better. If Israel and the Palestinians are going to reach a two-state solution–and they must–it’s going to take as assertive a US administration as possible.

Clearly, all of this isn’t easy. It’s a marathon. It’s not going to happen overnight, but nonetheless, the goal posts are clear. Because there is no alternative to a two-state solution that doesn’t involve a tremendous amount of bloodshed and loss for both sides. There is no alternative. If you accept that, for anyone who cares about the future of Israel–as I do very much–then we need to help them by opening up the conversation in Washington.

We’re making progress one step at a time. The most important work that all of us can do is to keep moving up that hill.