“Beyond the Headlines” is a new feature on the J Street blog that offers analysis and perspective on our core issues. Written by staff, leaders and activists from around our pro-Israel, pro-peace, pro-democracy movement, these pieces are not official statements of J Street policy, but reflect the views of their authors. Have something you’d like to share? Send us an email and we’ll chat.

Mahmoud Abbas is full of surprises. His latest fan is Labor MK Omer Bar-Lev, who, after a meeting last week in Ramallah, said that the Palestinian president “presented his position [on Israeli security] with a frankness I have not yet heard from a leader in the Arab world.” Bar-Lev concluded, “There is someone to talk to and plenty to talk about.”

Leading the delegation was Bar-Lev’s new party leader, Isaac Herzog, who declared, “We have a partner willing to go far to achieve peace, to take creative, brave steps on core issues.”

At a time when the greatest obstacle to the two-state solution may be mistrust between the parties, these statements are incredibly important. The more that Israelis realize that they have a genuine partner on the other side, the more they may be willing to invest in a serious peace initiative.

But there’s a twist in this strategy: Abbas’ moderate remarks are almost as old as he is. 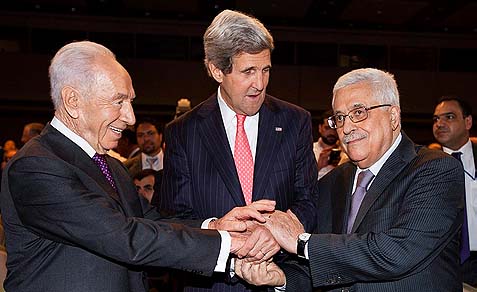 Even in the early days of the Palestinian Liberation Organization, the Fatah cofounder had a relatively middle-of-the-road reputation. He discussed the notion of a two-state solution in channels with Israelis as early as the 1970s and steered the Palestinians to formally adopt it in the Oslo process, where they officially recognized Israel, accepted two states based on 1967 lines and renounced violence. Six of his grandchildren have attended Seeds of Peace, a US-based summer camp that seeks to build relationships between Israeli and Palestinian children.

The man is hardly without his flaws. But as a product of a leadership borne from rejection of Israel, Abbas has helped to transform his party into one of the Jewish state’s most reliable security partners. And in both private and public settings, he has demonstrated willingness to compromise over the most contentious issues of the Israeli-Palestinian conflict.

On the matter of security, Abbas has repeatedly accepted the key Israeli demand that a future Palestinian state be demilitarized. “We don’t need planes or missiles,” he said in a meeting with an Israeli delegation last year. “All we need is a strong police force.”

Leaked documents from the 2008 negotiations revealed that on Jerusalem, Abbas offered to divide the city into Israeli and Palestinian capitals based on the Clinton Parameters, and proposed allowing Israel to annex Jewish neighborhoods that had formed in Palestinian East Jerusalem.

Though polls show that many Israelis still falsely believe that Palestinians seek to control all of historic Palestine, Abbas has remained clear regarding his support for a state based only on 1967 lines with land swaps. In an interview with Israeli television last year, he said, “I believe that [the] West Bank and Gaza is Palestine… the other parts [are] Israel.”

In that interview, he even shifted his rhetoric regarding the sensitive Palestinian “right of return,” saying of the Israeli town of Safed where he was born, “It’s my right to see it, but not to live there.” Angry protests led him to walk back those words, explaining that he had only been referring to his own personal desire, and that the “sacred matter” of refugees would be resolved in negotiations. But it may have had the desired effect: welcomed by President Shimon Peres and soon-to-be negotiator Tzipi Livni, Abbas’ words were used as justification in Israel that there was indeed a Palestinian partner.

It’s a fine line to walk–one that’s certainly gotten him into trouble. When Abbas makes overtures to Israel, some Palestinians accuse him of selling them out. When he hardens his rhetoric to win political points at home, some Israelis insist that he isn’t serious. But for better or for worse, his political fortunes now depend on progress with Israel, and Abbas is getting too old to shift gears now. Plenty of others have taken up the mantle of Palestinian resistance–Abbas has staked his legacy on Palestinian statehood.

Which is why Israelis need to need to hear him now more than ever. He may get his chance–last month Prime Minister Netanyahu extended to him an invitation to address the Knesset “and recognize the relationship between the Jews and the Land of Israel.” And though Abbas tacitly accepted, in order “to say what I want to say and not what [Netanyahu] wants to hear,” the Palestinian president may just surprise him. After years of his words falling on deaf ears, Abbas’ moment could be about to arrive.

Aaron Zucker is a communications and media assistant at J Street.